Composed by the Olmsted Brothers landscape architects to the current university president, George MacLean, this 16 page report set the foundation for the University as we know it today. The Olmsted Brothers recommended that the University continue to purchase land, including land on the west side of the river, to allow for future expansion. They also suggested two new buildings northwest and southwest of the Old Capitol to complete the Pentacrest design. Additionally, the plan encouraged the preservation of green space along the Iowa River to serve as a public park for students and Iowa City residents alike. 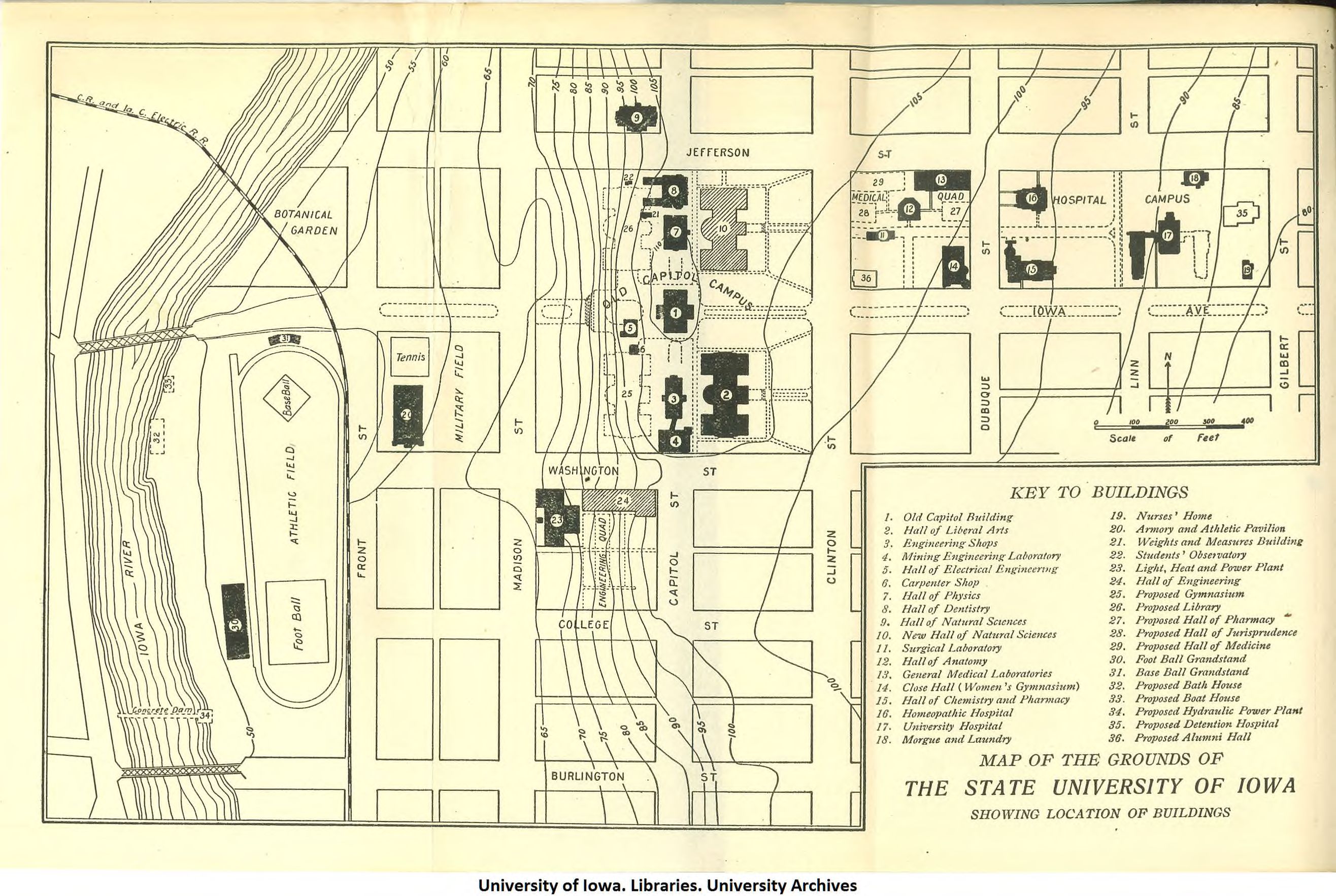 The 1965 Master Plan was composed of three separate reports. While Report No. II is currently missing from our collection, Report No. I and Report No. III are available for viewing. The first report focused on the physical development of campus that would need to occur to accommodate an expected 30,000 students. With the increasing student population, the consultants, Sasaki, Dawson, and Demay Associates, Inc., estimated the University would need nearly 3 million additional gross square feet of building space. With Iowa City’s urban renewal plan under works, the consultants recommended acquiring space south of the Pentacrest. The first and third reports indicate that Report No. II focused on the locations of new housing complexes for the University. Finally, Report No. III summarized long range plans for the campus. These plans included making Capitol St. a pedestrian walkway (today’s T. Anne Cleary Walkway), adding co-ed dormitories south of Capitol St., and utilizing arterial streets so that traffic could by-pass central campus areas. Other important circulation topics included connecting Highway 6 and Melrose Ave. (today’s Hawkins Dr.) and diverting Newton Rd. to create an internal circulation loop for the medical campus. 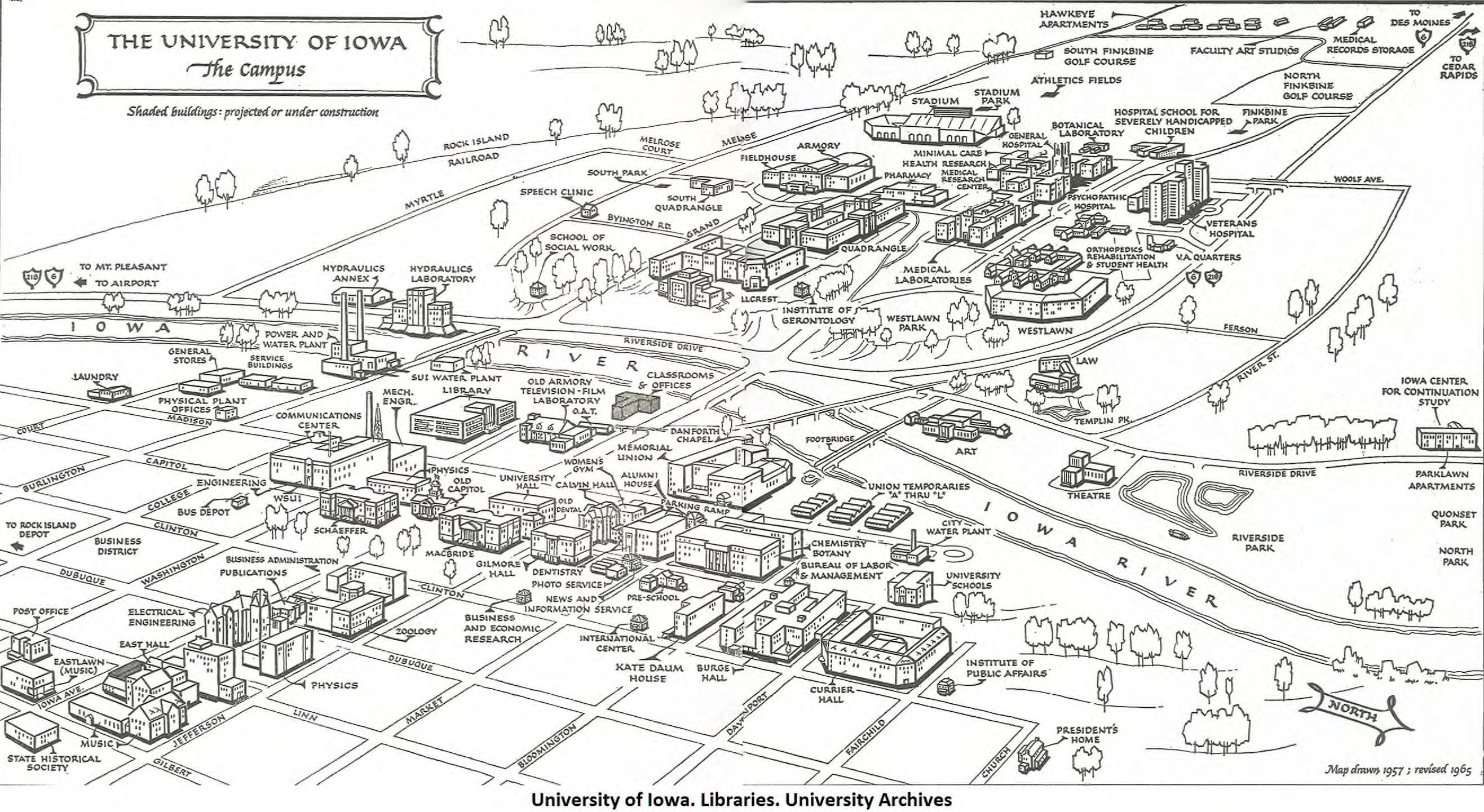 While it seemed that this framework plan was missing from our collection, other historic plans filled in some of the gaps. Hodne/Stageberg Partners, Inc. were hired to complete this plan. The consultants decided that a framework that was structured enough to achieve cohesiveness but flexible enough to allow for incremental changes would be more successful at the University than a traditional plan. Hodne/Stageberg Partners worked on several projects at the University using this framework mindset, but no official planning document was written to summarize the framework or the projects. The consultants continued to work with the University and assisted with the development of the 1978 Master Plan. As such, the 1978 plan is the official summary of the framework idea from 1972. The framework was a guide for plans even after 1978 and can be seen in current-day campus planning. 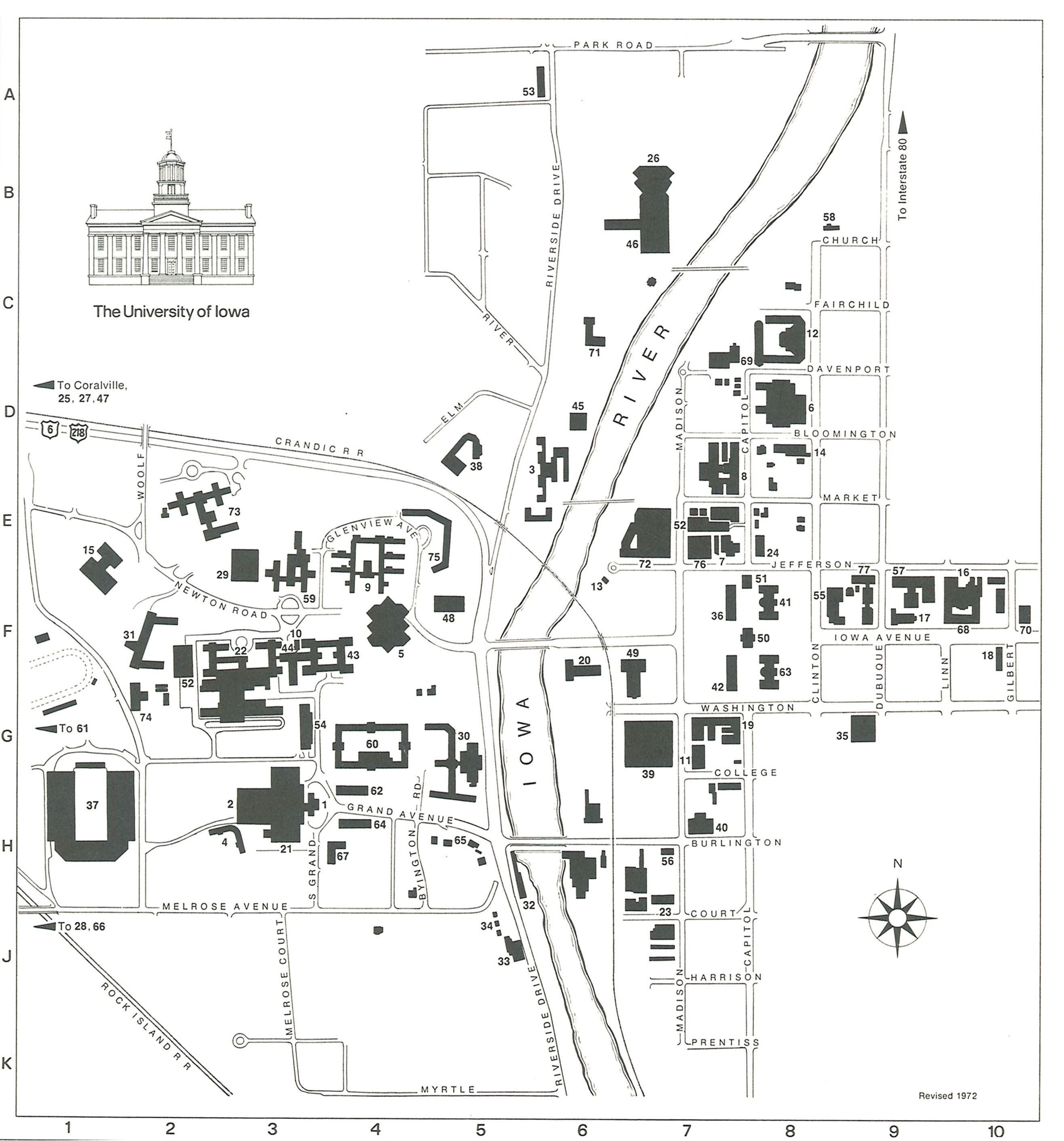 Formulated by the Task Force on Campus Planning in the fall of 1977 and published in January of 1978, this master plan covered several planning themes such as land use, circulation, and utilities. The campus was split into seven functional areas for analysis and recommendations. The Task Force recommended leaving 20% of the land in each functional area as open space. Circulation recommendations included closing Capitol St. (first recommended in 1965), College, St., and Grand Ave. to better support a pedestrian oriented campus. Two of the three recommendations were followed to construct the T. Anne Cleary walkway and Iowa City's downtown pedestrian mall. The Task Force's ideas for the medical campus resulted in relocating a portion of Newton Road from the south side to the north side of Hardin Library. This helped support pedestrian movement on the west side of the Iowa River. The plan also suggested that the hospital replace obsolete buildings to reduce outward expansion. Among several potential new buildings, a new Theatre Building stood out as a priority to consolidate Fine and Performing Arts and to move Dance from North Hall to the arts campus. The 1978 plan was also pivotal in the addition of Carver-Hawkeye Arena which moved basketball, wrestling, and gymnastics out of the Field House. 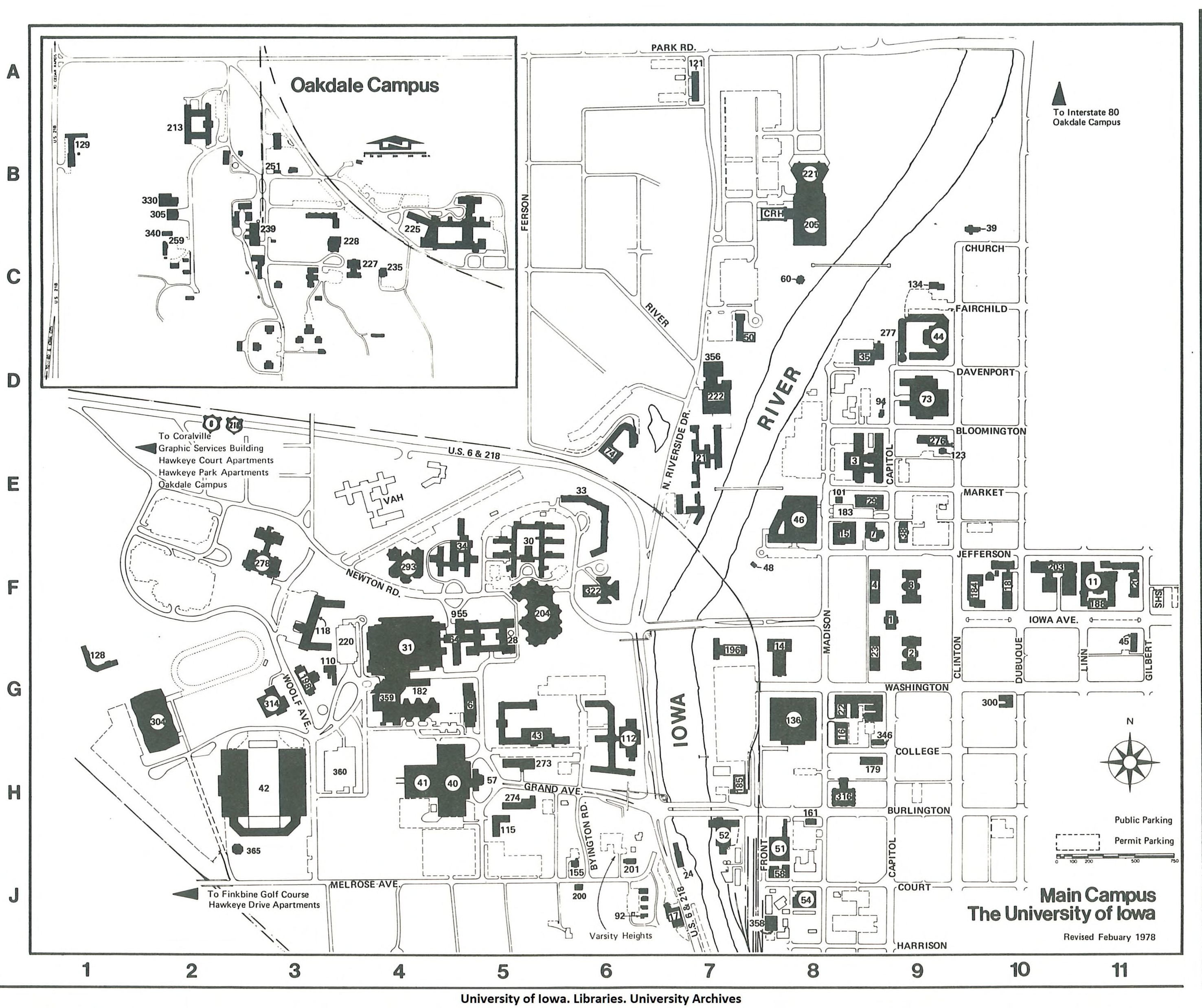 The 1990 Campus Planning Framework relied heavily on the work completed for the 1978 plan. The functional areas were maintained and concepts and plans were updated rather than experiencing major changes. Improving pedestrian circulation was a major theme throughout the plan with a focus on utilizing pedestrian malls as alternatives to green space. Proposed road closures included Washington St. north of the Main Library, College St. south of the Seamans Center, Capitol St. for the current-day T. Anne Cleary Walkway, and Davenport St. and Bloomington St. surrounding Burge Hall. All of the proposals were completed along with a shift of Newton Road to create a pedestrian mall through the medical campus (near Hardin Library). Another major focus on the west side was on vehicular circulation. The City had plans to widen the bridge on Melrose Ave. just west of Kinnick Stadium which would allow all of Melrose Ave. to be widened. There were also proposals for a diagonal road from Melrose Ave. south of South Quad (Lot 14) to the intersection of Grand Ave. and Byington Rd. While this proposal would have demolished the parking lot and six University residences, it would have allowed for the closure of Grand Ave. between Rienow and Slater Halls to allow for more green space for pedestrian circulation and recreation fields. 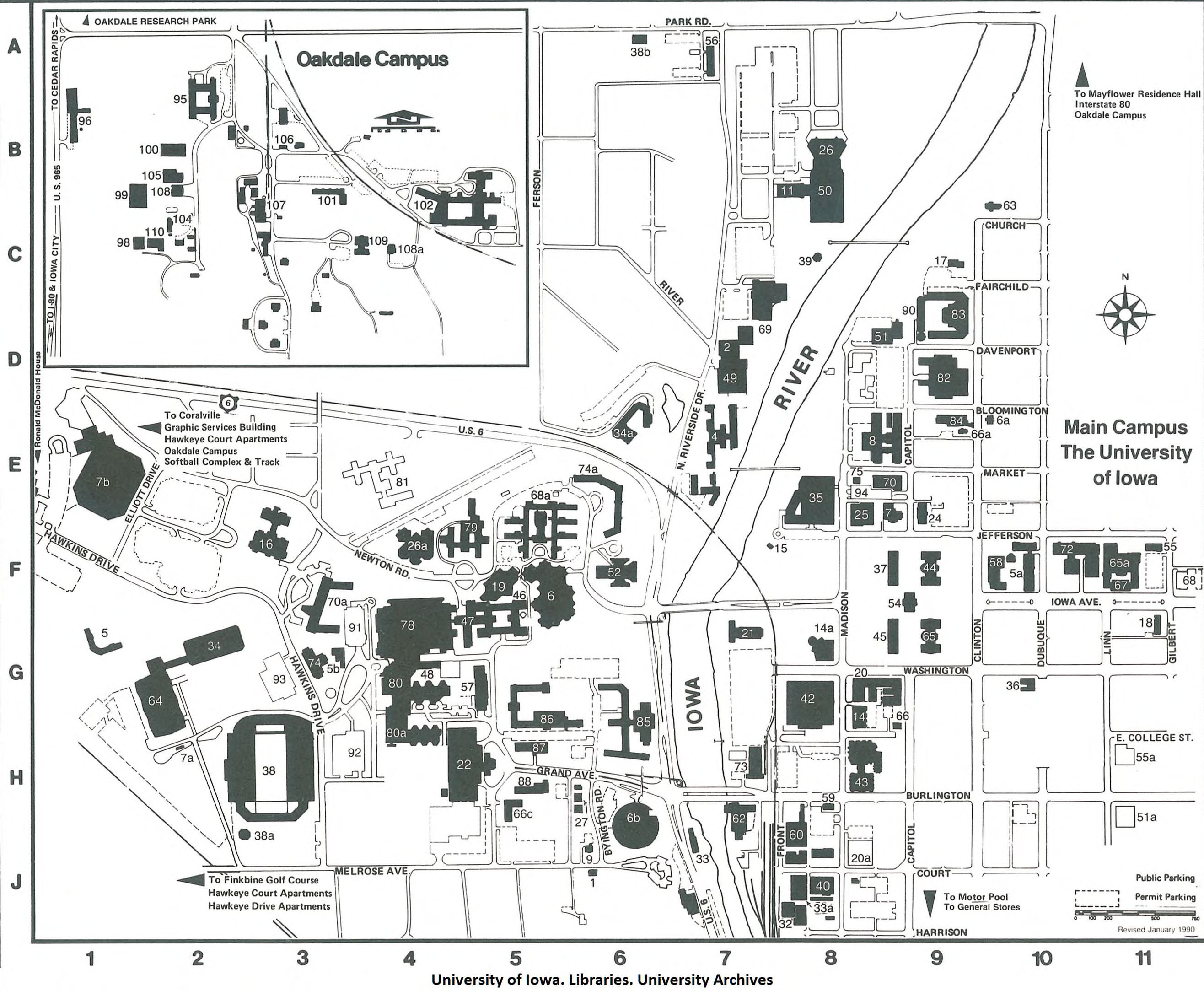 In 1998, Dunbar/Jones Partnership completed updates to the 1990 Framework. The plan contained some elements that were similar to previous plans, such as the use of functional areas, but also included important additions. For example, the 1998 plan was the first to utilize and discuss campus participation. Members of campus were able to comment on the strengths and weakness of the campus along with proposed steps for improvement. The plan also incorporated a number of previously completed plans and studies ranging from athletic facilities master plans to an urban forest study. These plans included projects such as demolition of the Steindler building and the addition of the Medical Education and Biomedical Research Facility on the Medical Campus and the addition of a golf clubhouse for the Far West Campus. Other major themes included adding temporary parking and passenger drop-off locations on campus as well as developing campus entrances to provide a sense of arrival to the University of Iowa. 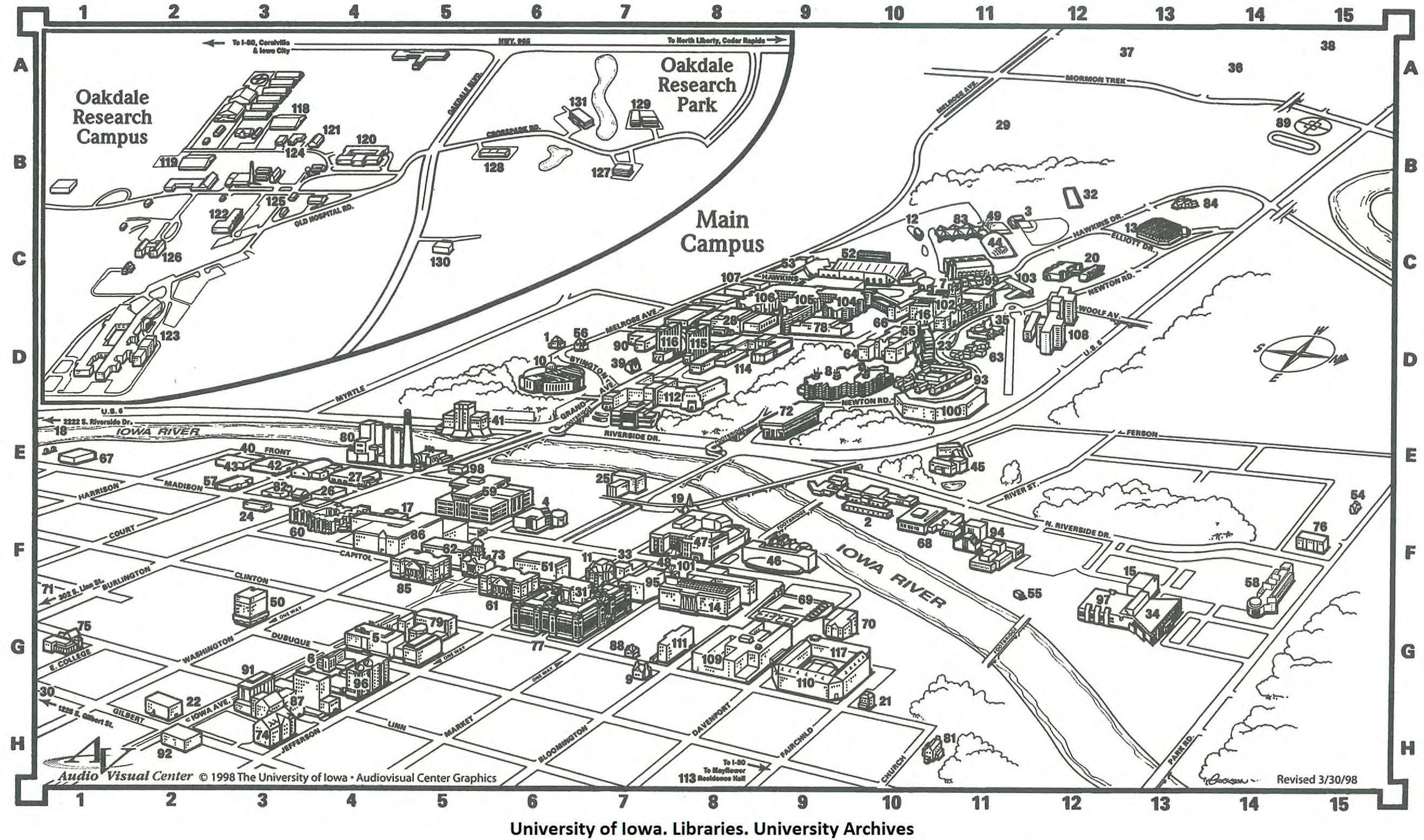 The 2006 Master Plan continued to develop and guide themes from previous plans including wise use of land, open space preservation, effective pedestrian and vehicular circulation, and thoughtful use of parking. Studies of existing facilities helped determine where renewal could occur, presenting sustainable ways to meet space needs. Similarly, infill strategies were explored to further optimize campus space. This compact growth along with support for CAMBUS and bicycle systems would continue to reinforce a pedestrian-oriented campus. Finally, building on the Olmsted Brothers' recommendations from 1905, the 2006 plan highlighted the importance of protecting open and natural spaces including the development of a park along the Iowa River. 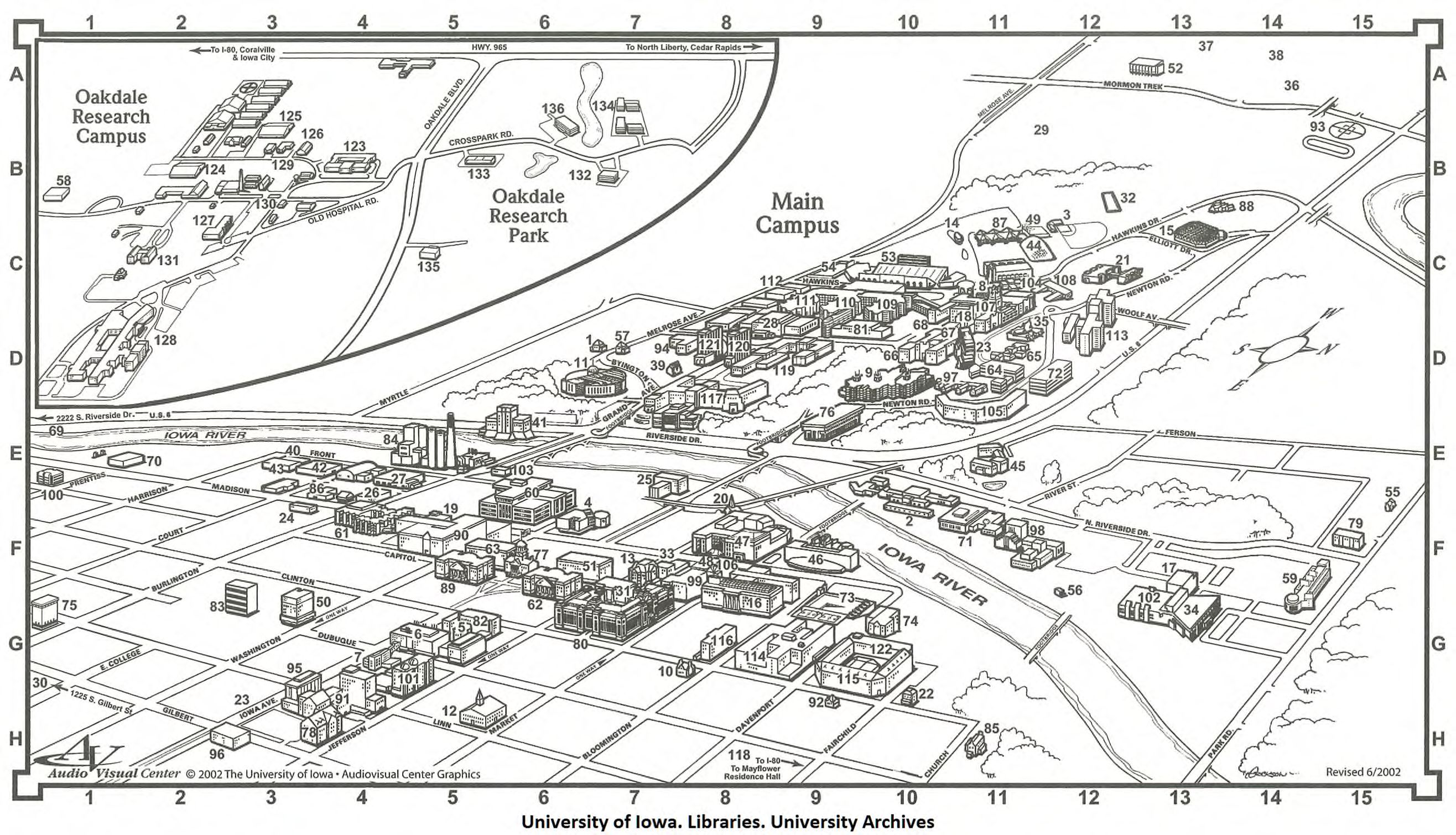